My fellow generals, this is Hsien Yue Fei, making a report on a curious incident that happened shortly before the surrender of Pan Oceanian troops at the Cameliard Guard Post. Before I share details and images captured during the battle, I will share one more time the key intelligence report that proved Cameliard to be a legitimate target for the Durgama Defence Coalition. Because of the following recorded conversation, we believe this location to hold information stolen from Yu Jing at the Alpha Four-Four site on Paradiso during the Glottenburg Border Incursion, shortly before the Cosmolite site there was demolished:

A twisting tendril of strawberry-flavoured cigarette smoke spiralled through the air as Major Lisette Beckmann, Garkain Operative[1], rolled over on her sun lounger and arched her body, straining the spaghetti straps of her undersized bikini.

“Kyle Hawkins, I need some more Sun Cream, would you be a dear?” She purred. Despite knowing full well that the engineered skin of her amply endowed Lhost body would never burn in the bright sunlight, she had decided that was a fact she would keep on a strict “need to know basis” for the remainder of her six weeks of leave.

“Of course, let me… Ooops!” Kyle fumbled and then caught the container of lotion, as he almost tipped it over the bulky frame of the Heavy MULTI Pistol resting on the table next to their cocktails. Even though they were taking some well-deserved R&R, they couldn’t help feeling a little more relaxed knowing they had ready access to multiple high-calibre ammunition types. Hawkins would never understand what would make a man want to use the VIRAL Pistols so common amongst mercenaries, but then again, he was a Knight of the Most Holy of Orders.

As he rubbed the oily lotion into Beckmann’s back, the young Hospitaler reflected again on his recent experiences during the Glottenburg Incursion[2] on Paradiso. His new relationship was an unexpected outcome of his first real combat engagement, though countless other questions still troubled him. Would he ever understand the Tohaa’s involvement with the Cosmolite? Was it a sin to use smoke to cover your way into close combat? Had their explosive demolition of the Alpha Four-Four site destroyed important information that humanity would now never know[3]? What steps, if any, would the Yujiingyu empire and their allies be prepared to take to obtain the information he had been able to send to his superiors?

Perhaps, with her years of experience in the Hexahedron, his girlfriend might at least be able to help him get one question off his conscience.

“Lisette, do you think I did the right thing, sending a copy of the data from the Cosmolite to the Cameliard stronghold on Durgama Peninsula?”

“Kyle, didn’t you get a big enough pat on the back from De’Fersen? The whole affair is out of our hands now and we can just kick back for the next few weeks. Your order has rated you Above Average, but make sure you don’t miss a spot with that lotion if you want the same rating here.”

She turned, flicking a loose strand of hair away from her perfect face and removing her mirrored aviator shades. A trickle of tanning oil ran slowly down from her collar bone and disappeared into the swelling curves of her cleavage. She looked intensely and deeply into his eyes.

[2] see Infinity: Downfall for more information on the Glottenburg Incursion

[3] Obviously, yes it had. But you’re not really looking at this from a purely Pan-Oceanian perspective now, are you?

The mystery of the Alpha Four-Four Cosmolite Data is one we hope to unlock in the next few days. What is unanswered though, is why we were intercepted on our way into the guard post by a small insertion force of Tohaa.

The first inkling we got that something was wrong was when some kind of tactical accountant popped up and murdered our bounty hunter team. We stuck to our mission and our ninja opened the armory doors. While it would have been smart to send the ninja in stealthily for a look around, instead we advanced our Kuang Shi team to test if the panoplies were booby trapped. They weren't, but the noise alerted a Draal and Digger who dodged through the open doors into the armory.

My fireteam acquitted itself fairly well, and I lead by example executing a diminutive Tohaa laying down suppressive fire. My Zhanying agent traded her life for that of the tactical accountant, no doubt worried that the DIU expense reports generated by this expedition would be far too much paperwork for her to handle alive. We then dealt with a Kerail preceptor and Surda attacking us, I distracted the bounding mutant hound while my CSU shotgunned the handler.

At this point, the instigator of this operation made his way onto the field. Long-time nemesis of the DIU, Jager Nadim, showed up. We have been on the trail of Nadim since Wotan, where he was caught up in some kind of meat smuggling crime ring, and ran into him again during the Kurage Crisis. We last saw him in the Japanese Bottom of Novyy Bangkok, where our Rui Shi gunned him down before we could question him. Our Rui Shi and Nadim have quite a history, though regrettably we did not have it with us on this most recent occasion.

This time, the Cube Jager hit me with a single e-mitter shot at optimal range and completely bricked my armor just inches outside the Armory door. Perhaps it is fortunate that we are allied with the Tohaa in Durgama, as they were content to watch me trying to turn my armor on and off while they checked the armory for whatever they were looking for. Our CSU acquitted herself admirably trying to thin their numbers, but by that point it was too late.

Embarassing as this episode was, it does not take the shine off the capture of Cameliard and my role in it. The DIU made the case for this target, built consensus amongst the Yu Jing Generals and cemented the Durgama Defense Coalition as an alliance against the Combined Army and redress against Pan Oceanian crimes against humanity. Our Hac Tao was amongst the first to open the gates to the Guard Post. Once O-12 files the correct forms and sees what we find here, they will realize the basis for our actions lies in truth, which now backed up by action, cannot be ignored.

After an uncomfortable six hours the servo motors of my suit were unlocked by a senior Zhanshi Gongcheng and I was able to make the speech congratulating you all on securing the Cameliard Guard Post for the State Empire. I am honoured to fight for Yu Jing and to be granted the opportunity to lead you in Durgama. 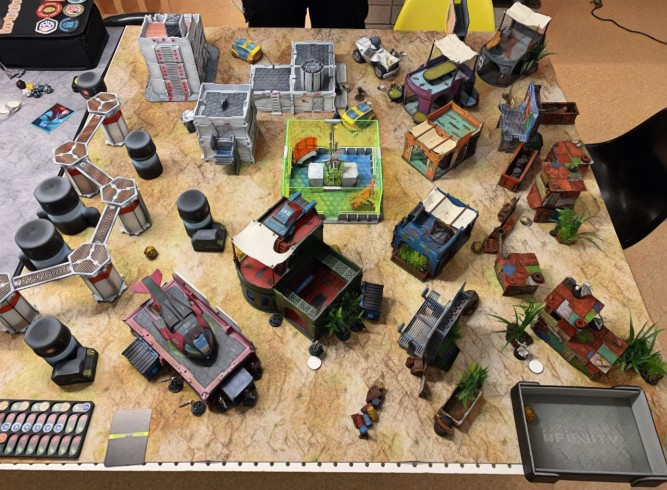 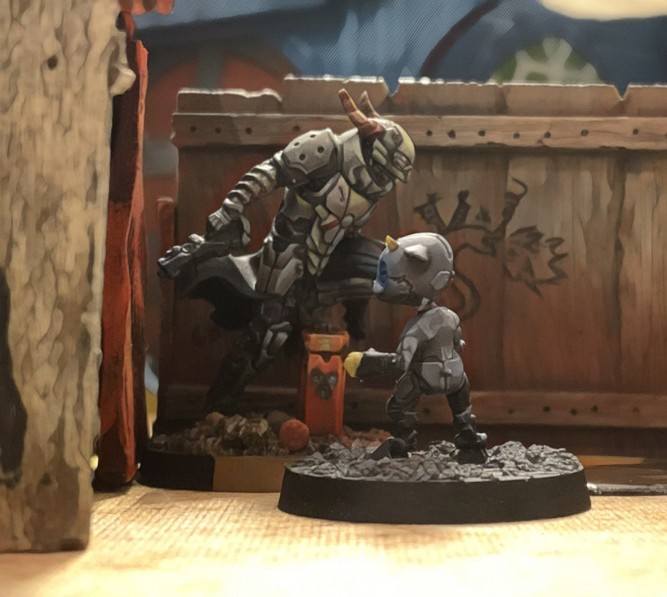 An operator that caused a fair bit of greif, before getting glued by and madtrap and shot by our Zhanying agent. 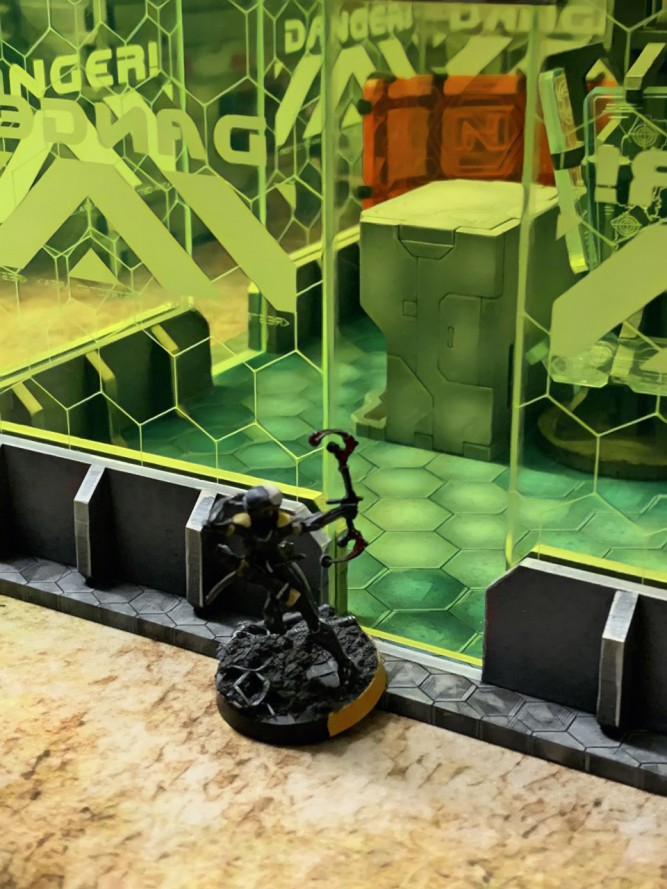 It would have been a brilliant idea to walk this stealthy ninja into the Armory. I did not do that. 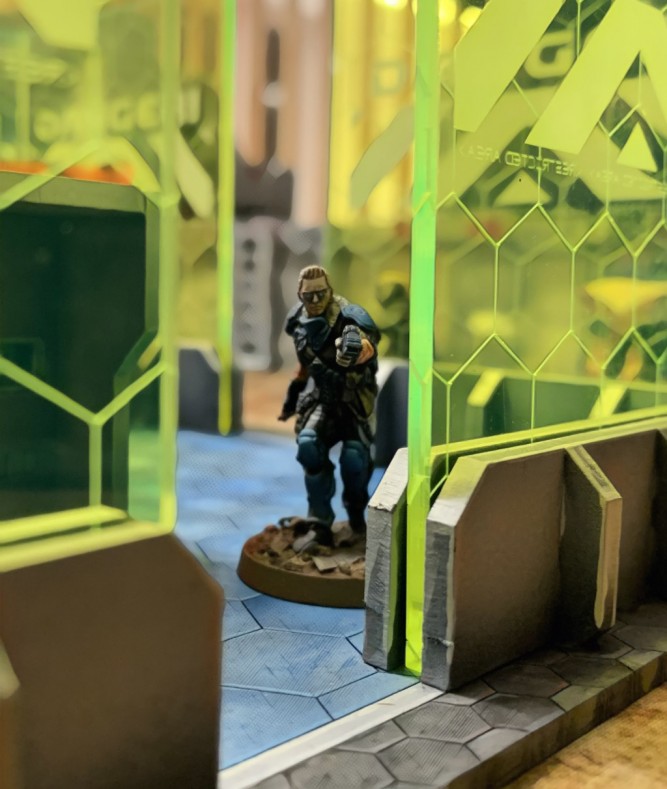 Instead, a Kuang Shi failing to open a panoply caused this Digger and a Draal Saboteur to dodge in. 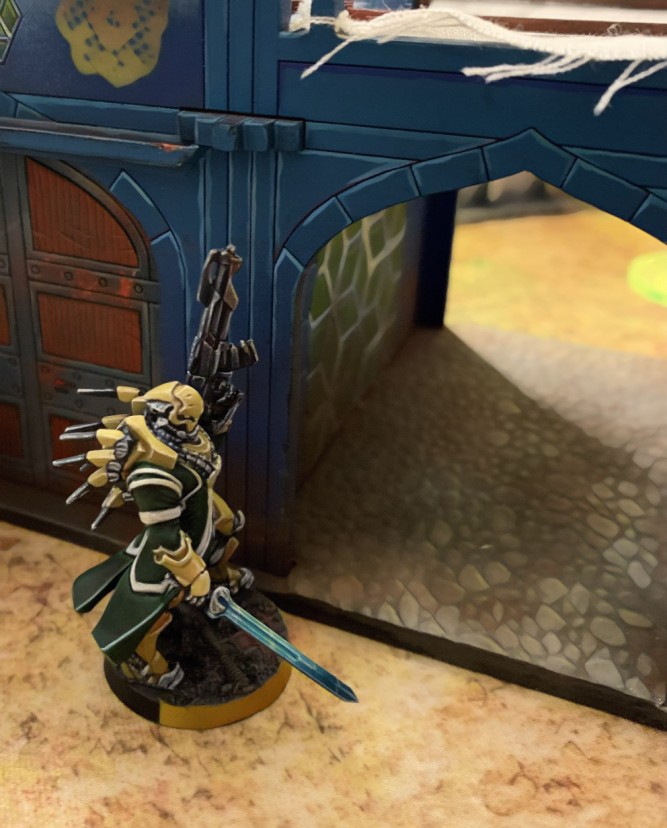 I walked around and calmly shot a Kauuri, then ineffectively bounced a few hmg rounds off the Draal Saboteur and digger. 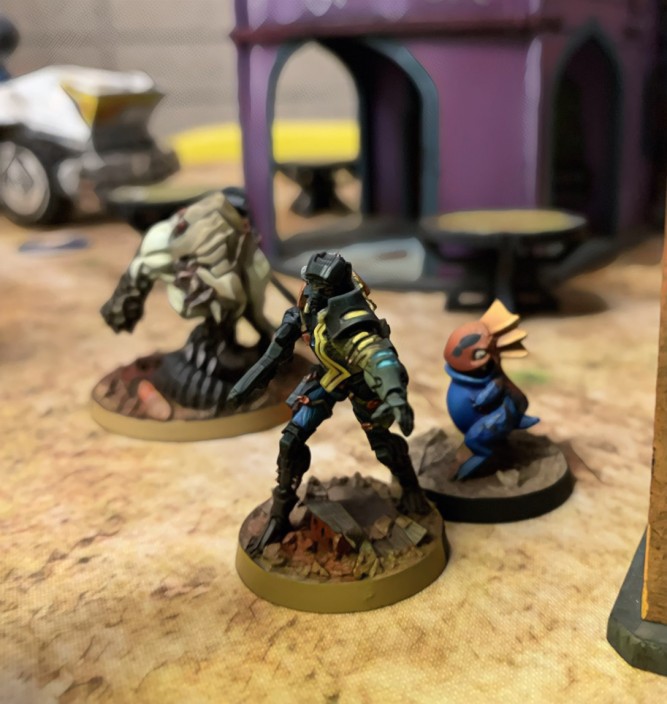 A kerail preceptor and his surda beast came bounding forward to cause trouble. 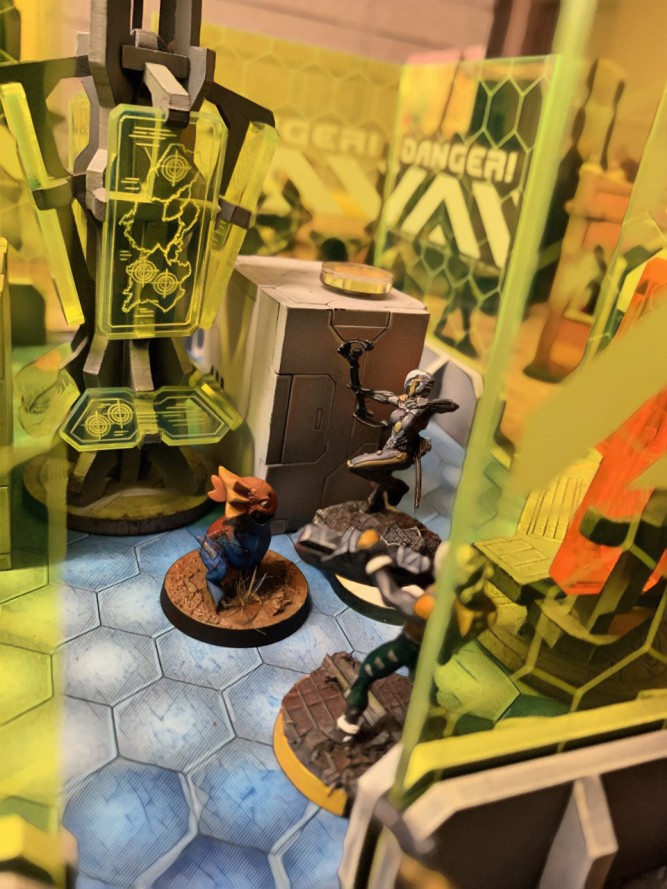 A brightly colored pokemon of some kind killed our Ninja. 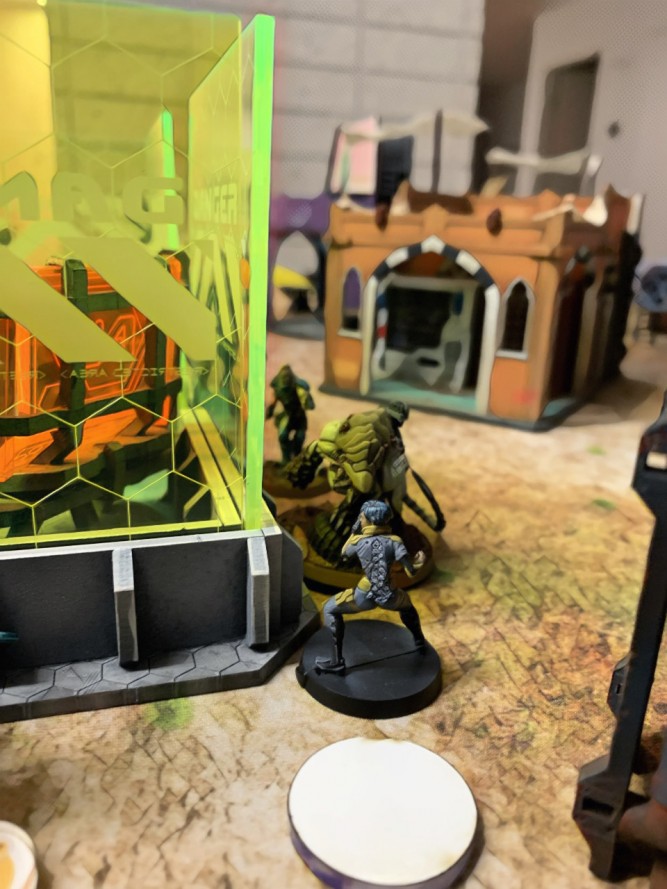 Then our CSU and Kuang Shi killed the kerail preceptor as the dog bounded forward into combat with me. I dodged away. 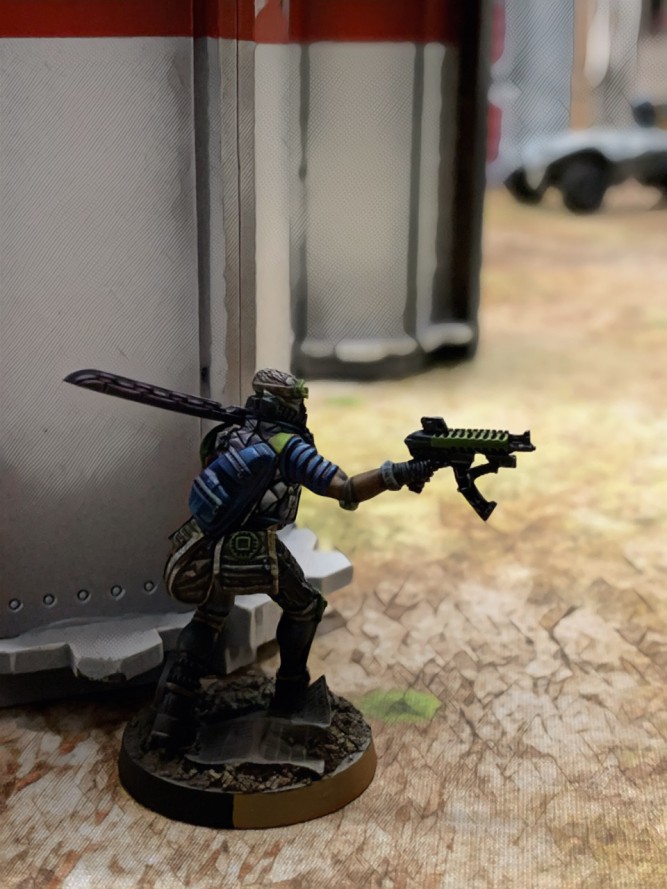 Then, the dastardly Jager Nadim made his appearance and hit me with an e-mitter. My armor locked up completely. 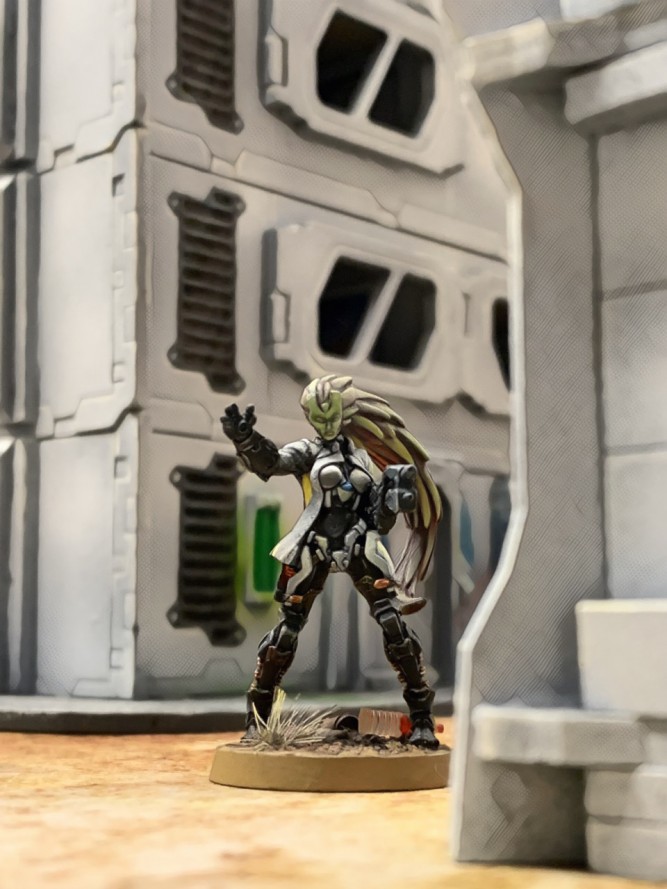 All kinds of strange characters converged on the armory. 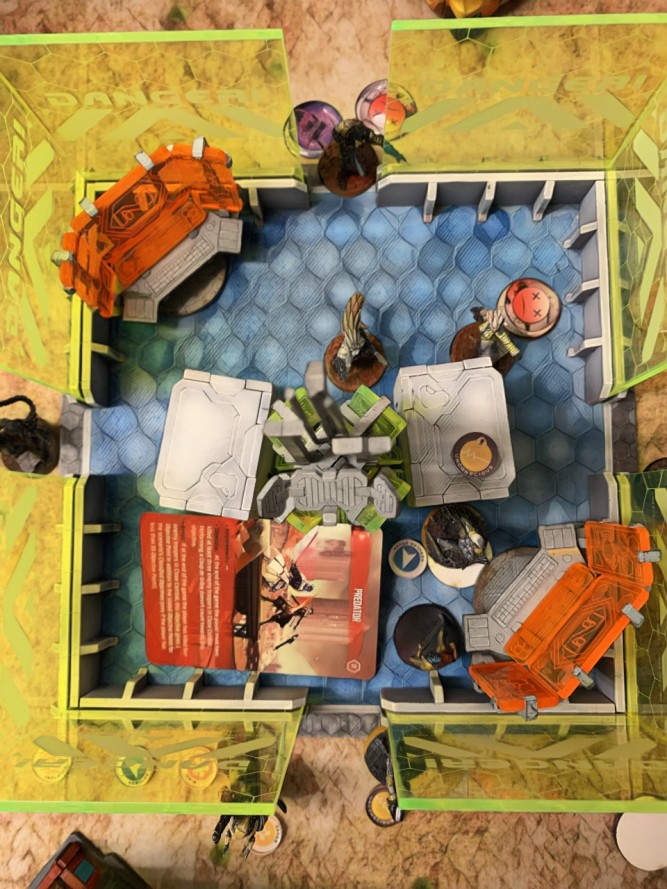 Which was a mess, despite our CSU's quite impressive solo attempts to clear it out. 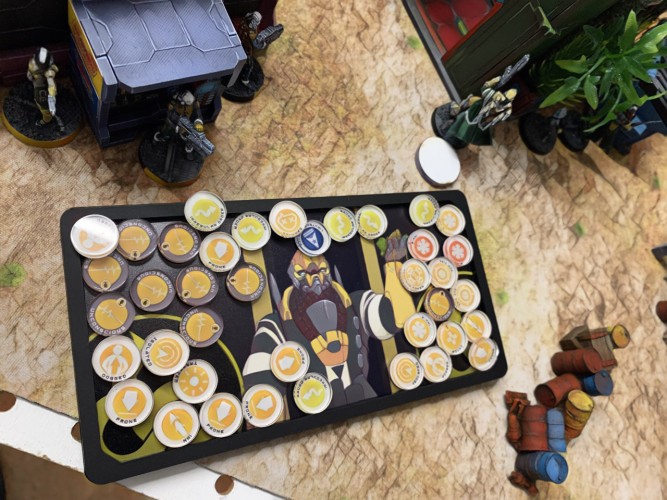 Still, my token set thingy looks nice. So I've got that going for me.