“Brothers and Sisters,” boomed the loud voice of Colonel Wĕi, “Today is a historic day for us! Our wait is at an end and we face the ultimate test! To those of you who have faced combat before, be an example to your juniors and support them! To those who have never seen combat, follow your leaders, remember your training! Do your duty and historians will mark the first battle of the 55th Independent Brigade as a victory! Glory to the StateEmpire! Victory to the 55th!”

That had been 3 days ago. Lieutenant Kim of the 2nd Battalion, 55th Independent Brigade felt cheated of the glory and victory which the Colonel had spoken of. Just like the rest of the Brigade, he and his team had advanced onto their objective. However, unlike many others in the Brigade, he had found an empty, abandoned depot. Scars of battle were clear evidence that someone had been present recently, but no bodies made it difficult to ascertain who had been there. So, they had been re-assigned to a new target.

Kim fully expected this to be a bust as well. There was so much fighting going on that sending special teams out to destroy depot seemed like a waste. It would be better to just find the enemy's camps and destroy his forces there. He understood, intellectually, that stripping the enemy of his supplies will hamper future operations. But he wanted to get into the fighting for one particular reason.

His airheaded girlfriend in 1st Battalion had taken on and defeated a Morat force on the first day of operations. So now she was rubbing in the fact that she and her Invincibles had accomplished their Day 1 objectives while his White Banner troops had not. He didn't begrudge her the victory. It was her first combat. Kim had seen action before being transferred to the 55th, so he wasn't chomping at the bit to see the enemy. He also wasn't particularly troubled by the idea that the Invincibles of the 1st Btn had run into the enemy first. That was their job - smash the enemy with their heavy armor while the lighter, more mobile White Banner forces exploit the breach.

But now that she had made it a competition between battalions, White Banner versus Invincibles, he couldn't let her get away with gloating.

"Target in sight. Enemy forces in sight. As Command predicted, O-12. They look like they're transitioning rather than a garrison force." Gŭiláng Lee's report was exactly what Kim wanted to hear. He pulled up a map on his tablet of what Lee and the remotes had scouted, then he motioned for Shen Hui, the leader of the Shaolin monks attached to his team, to come over. 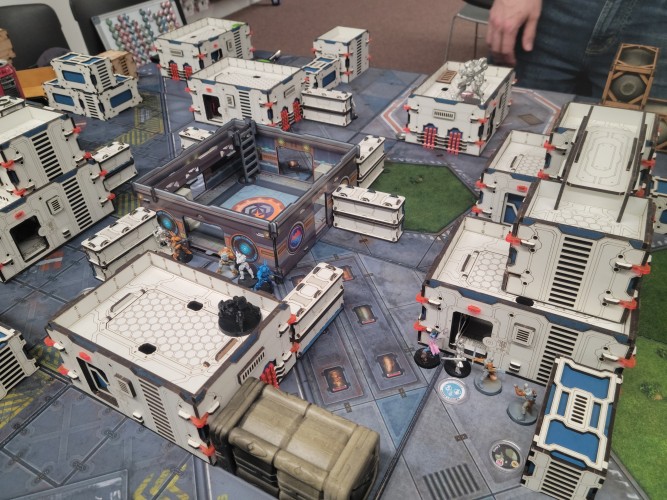 An overview of the battlefield 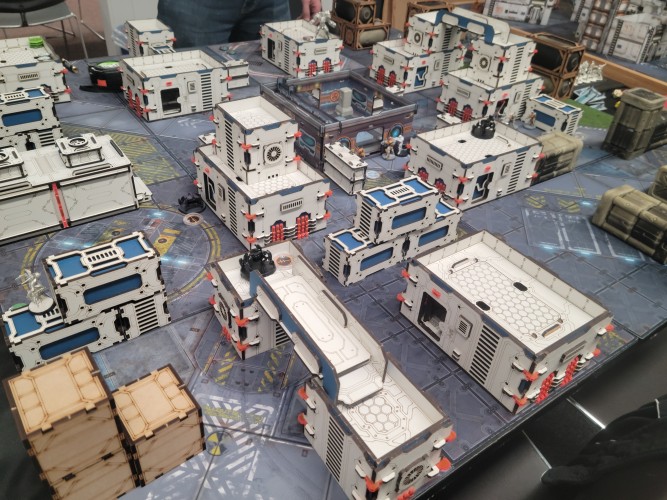 Pre-Battle: I lost the LT roll, so Doc elected to have me deploy first. I placed a camo'd Beast Hunter, Long Ya & my Chaiyi Yaokong on the left. My 5-man Jujak/Shang Ji team and another Long Ya in the center, Liang Kai (Joan model since I don't have one) and 2 monks on the right flank with camo'd Guilang. And mines to cover the flanks and rear. The Long Yas are on rooftops while the actual Yaokong is on the ground. No one had actual Long Ya models, so the Yaokongs came in as proxies.

The big Zeta on the roof is the only unit I can identify easily from my opponent's list. Somewhere in there, he had a Parvati, Saladin, Blue Coat, and an AD model (Crusher? Cruncher?). I apologize for not knowing O-12, this is only my 3rd real game of Infinity. I barely know what my own units are and can do. If Doc puts his list up, feel free to check it.

I also forgot to take pictures until after my Turn 1 was complete so, please forgive that lapse as well. We played 2 turns due to time constraints at the store.

YJ Turn 1
Monks in Group 2 move from their position forwards with smoke and don't get too far. I believe my worst mistakes this game resulted from not knowing how to use monks. This is the first - them not moving far.

The Long Ya on the left flank fires a flammenspeer at something and fries it.

5-man team moves up to the Armory door and opens it. House rules are that models outside the Armory can shoot into the Armory, but they cannot shoot through the Armory.

Beast Hunter moves past the Armory so as to be ready to move towards the door facing Doc.

O-12 Turn 1
My opponent's fireteams begin moving up. One in the center and one on my right flank. Saladin moves up to the door. The Crusher (?) comes onto the crate and uses his BSG to knock out both Yaokong and Long Ya.

Zeta attempts Discover on the remaining Long Ya and succeeds. The Long Ya and Hacker Shang Ji return fire with Panzerfaust and Multi Rifle. Panzerfaust hits and takes out two wounds. Multi rifle hits but doesn't wound. 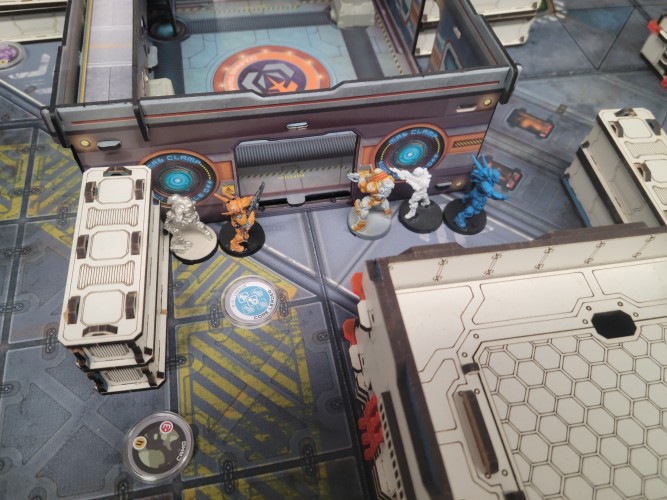 Stacked up on the doors 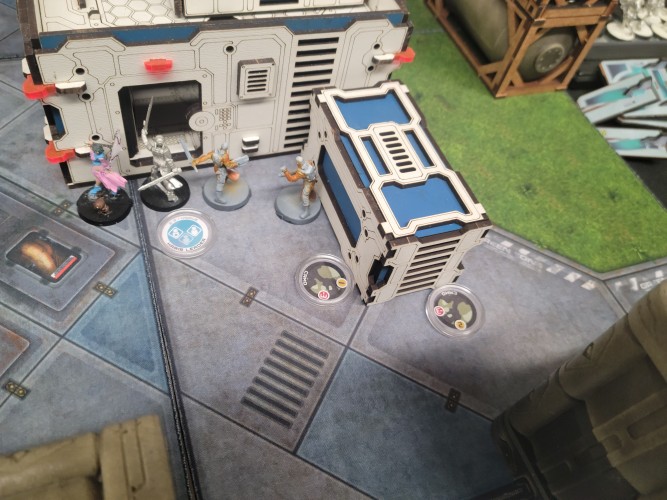 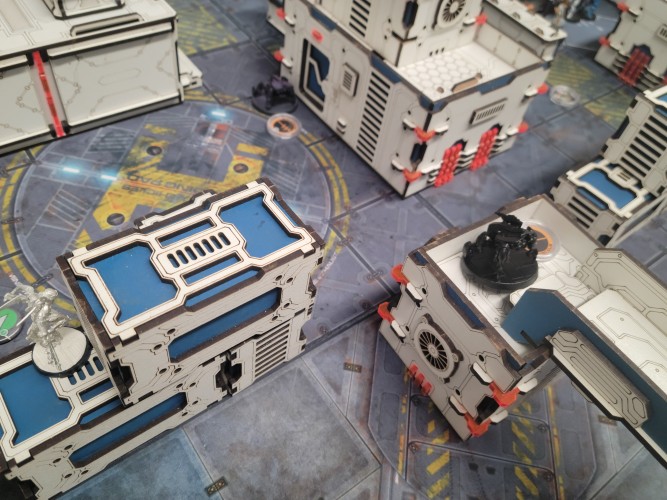 My weak left flank taken out 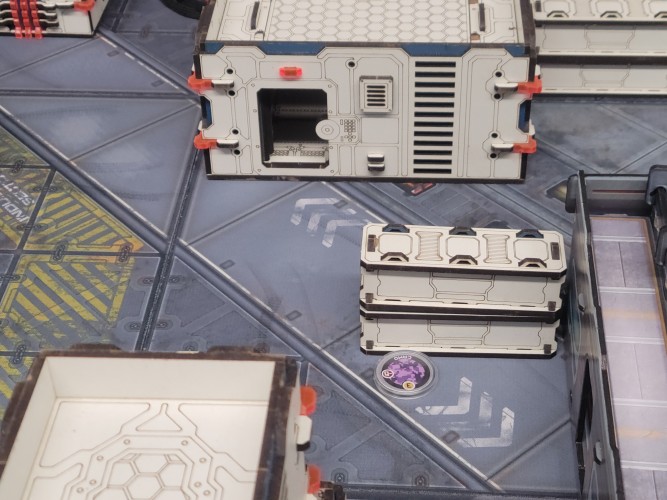 YJ Turn 2
With the Zeta down two wounds, the Hacker and HMG man switch places. In the process, Hacker takes a wound from ARO while AP HMG Shang Ji takes the Zeta to Unconscious. A second order of shooting kills the TAG, preventing the nearby Parvati from bringing him back up.

Now I move the Monks up to the door with smoke. So far so good. Here comes my biggest mistake with the monks (and I don't know how to correct it yet), I smoke the Armory with their 2nd to last order. This prevents me from carrying out my original plan to have Liang Kai berserk into the Blue Coat. I think, but am not sure, I should have just Berserked instead of smoke? In the end, I put Liang Kai behind a panoply, so his chain rifle watches the door and Blue Coat.

The good thing about the smoke is that it lets my 5-man team begin moving into the Armory. LT Kim moves in with his Combi/HFT and takes a position behind the other panoply. He's ready to flame anyone coming in.

Now comes my next mistake. One which, I am quite sure, if the game had gone into Turn 3 would have cost me the game. I move my engineer in but don't send him to a panoply. Instead, I try to get to the catwalk in the Armory and he gets Isolated. Hacker goes up to the nearest panoply, fails to open it, and as FT leader, gets Isolated too.

Beast Hunter tries to do a surprise attack on Blue Coat and Saladin with HFT, but 6th Sense and good saves means he goes down.

O-12 Turn 2
Doc uses Double Riot Gun (?) on his Blue Coat to glue a bunch of models in place. Liang Kai and AP HMG are the only two who don't get suffer from it. In return, LT Kim and Liang Kai kill the Blue Coat. Game ends here as we have about 15 minutes before store closes. 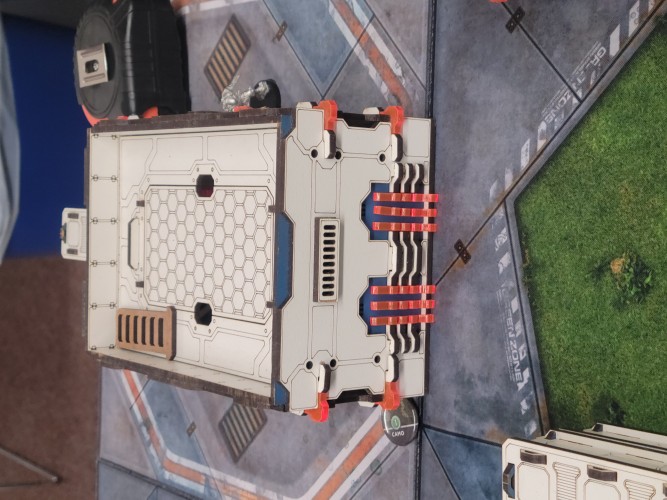 The spot occupied by the Zeta 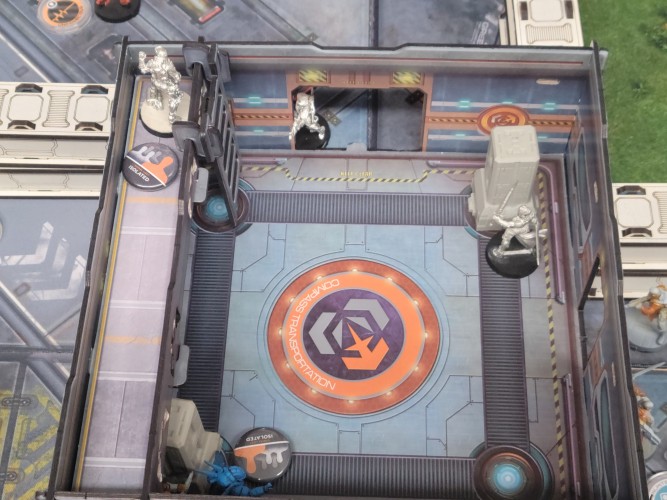 Final thoughts - First time with WBA. Interesting experience compared to last week's IA. Will have to play both more. And more vanilla YJ as well. If things had gone to plan and we had gotten the original space and time frame we wanted, Doc would likely have taken the game. My mistakes would have given him that opportunity.

--------
Kim blinked multiple times to confirm what he was seeing. "They're retreating? They're retreating!" he exclaimed with incredulity. Kim had been fully prepared for this to be his final stand for the StateEmpire. But it seemed that Fortune had other ideas. "Cho, Shen, let's get these guys unstuck! Lee, make sure they stay in retreat! Make haste before they realized that they had us!" Lord Jesus, thank you for this! Kim crossed himself and moved to free his engineer.

This was incredible. If he told Sù about this, she would think he was a liar. Hell, what were Command and the Colonel going to say? At least he had the helmet cams and Shen to support his account.