PROLOGUE:
After the mission on Cameliard they had successfully gathered the assets required from the human armory and had returned to extraction point. But there has been change in priority, apparently in the aftermath of battle these humans did manage to transfer some information from the encounter to the station they have in the planets orbit, and this would not do. When Jusm’el was ordered to arm and deliver the explosives they gathered from the human armory along with two of his most valuable specialists he would normally have at least formal argument with the commanding officer, however the order was given by Tuonela, one of the aspects operating here and Jusm’el knew better not to make any arguments. So now as the Suttle departed with his operating Caliban and Speculo. Jusm’el evaluated the situation and felt relieved. He would take the challenge to survive in this hostile jungle any day over the possibility of being part of spearhead mission under the uncaring aspect.

The explosives gathered from armory were used to give entry point from which we could deliver our boarding party. Two imetron surveillance rods were fired successfully to give valuable information of the area. The Comms room was massive and key to success was quickly locating correct databanks. However, as our troops moved in somehow it was the humans who had the initiative this time. 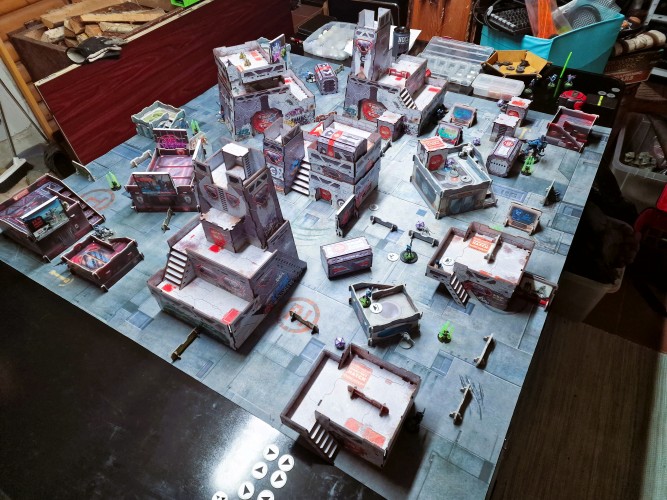 Battlefield, left side of my deployment 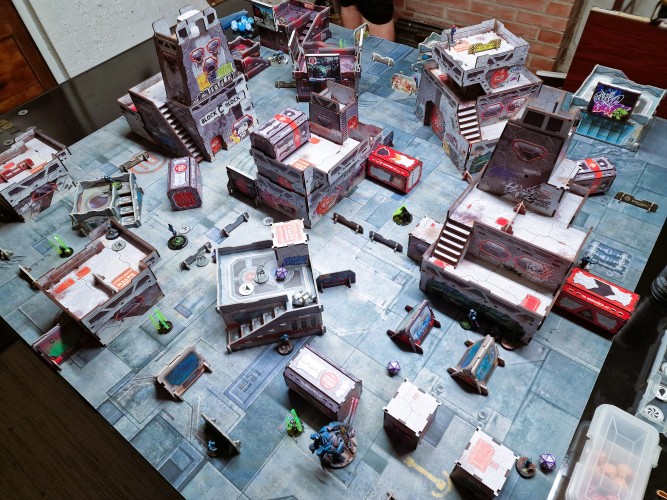 Battlefield, Right side of my deployment (Sally proxying Avatar)

Team of human soldiers moved in on our left flank two soldiers backed up by one of the combat remotes we had previously encountered. They managed to move in rapidly but even with the help of Visor blinding equipment couldn’t take down the Haiduk who was already in excellent firing position providing cover for the rest of the troops to move in. Through the fire Taiga bounced and darted until it was too late for the human shooter take down the beast. As they decided to move to more defensive position our taiga claimed the leading soldier.

Before our speculo could close the distance Human marksman raised up from behind her cover to get clear shot on our Q-Drone and against our commander. Q-Drone optics where hit and it stumbled to ground while the human didn’t manage to get solid hit on the Avatar Chassis. Second round of fire went off, but this time Tuonela was aware of the attacker and the detonating sound of Explosive rounds was herd in the distance and the marksman was no more.

Unfortunately, Speculo was disposable asset for Tuonela and while she was trying to recover from the explosion that killed the marksman, she staggered too close to edge and the enemy shot her down before she could dodge into cover. Human advance was finally halting. 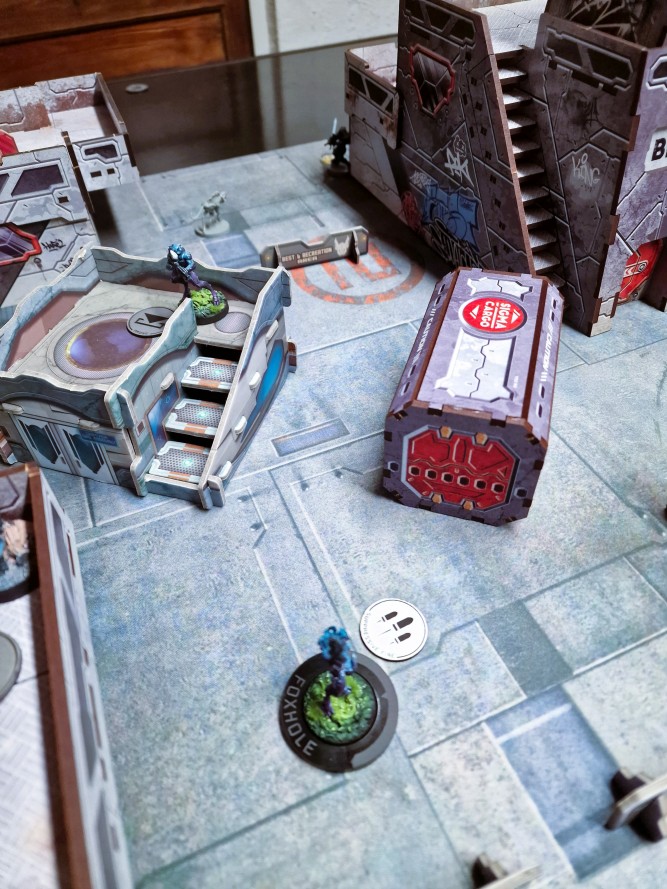 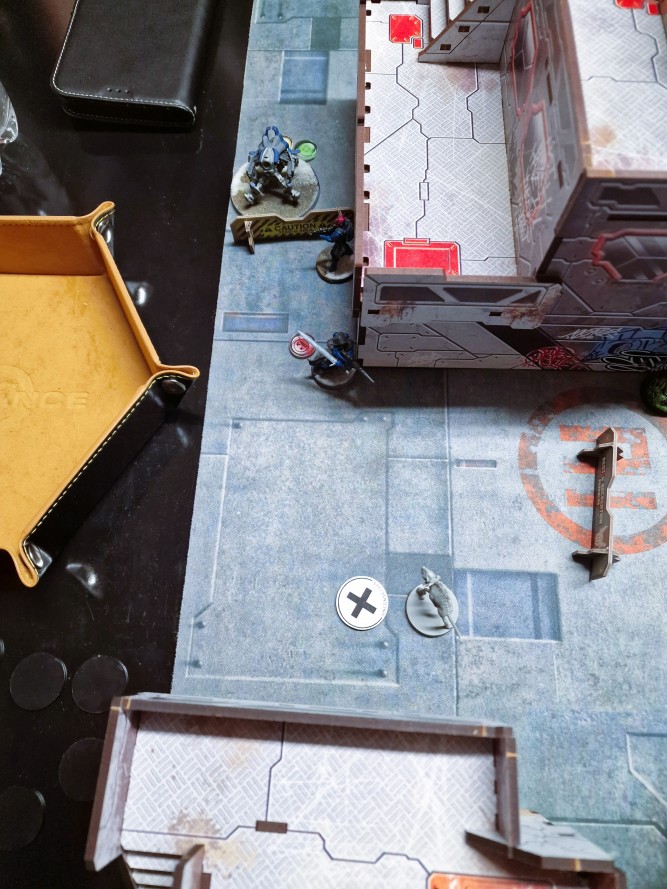 Chaincolt claims the friar while taiga goes down aswell

Far in forward taigas sprinted towards the enemy positions. Bit & Kiss proved to be worth their reputation. they managed to plant long range repeater and caught the enemy hacker off-guard. Tuonela moved forward gunning down one of the recon remotes while it advanced. We didn’t gain much ground, but the Caliban engineer managed to fix the Q-Drone trough his servant.

What remained of the larger human combat team made their way to the left console. haiduk tried to hold the position but was out gunned and fell. We only saw their engineer to operate the console, but if something was achieved, we do not know. 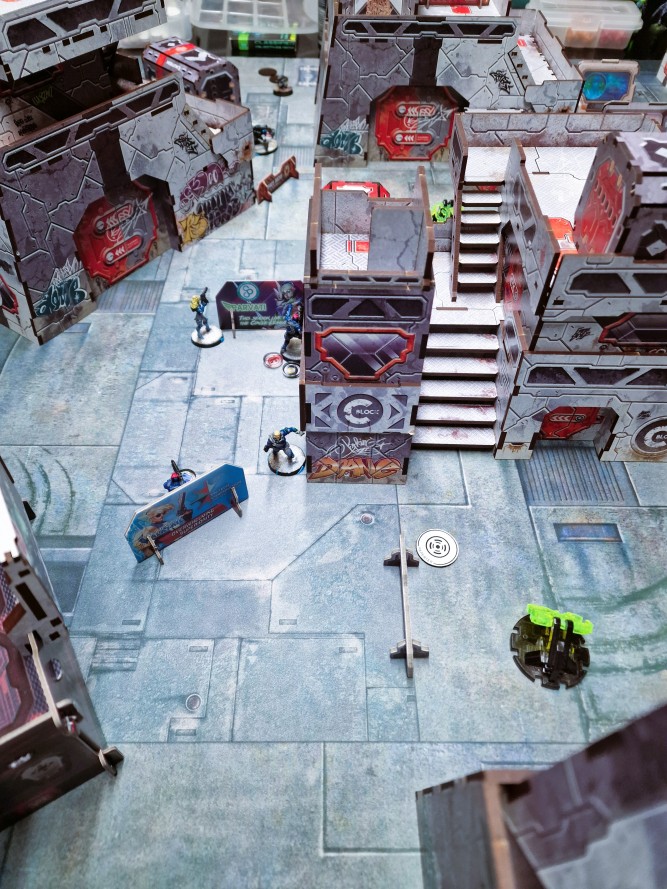 Bitt & kiss in action, repeater lands on the spot and Trinity takes down bolt hacker.

Now when the Haiduk was gone our left flank was crumbling. Bit made haste and reached the right console and was able to gather the data without problems. Once our taigas made sort work of the databanks. Tuonela moved towards left flank. Human combat remote managed to put up valiant defense but eventually was gunned down. Caliban moved in to secure our secondary objective by capturing the engineer.
On the final moments of the battle single human specialist made mad dash towards one of the databanks. and even as the Sepsitor claimed his mind he fulfilled his mission, and the databank blew to pieces. 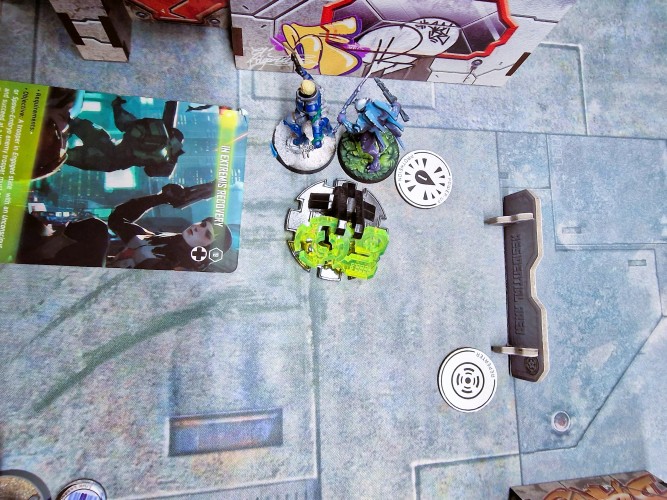