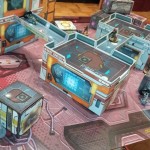 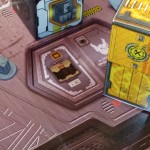 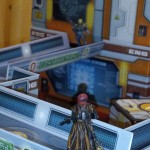 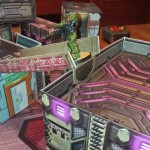 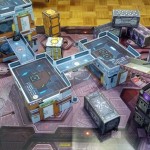 This is a silly game I played with my girlfriend, who, after having seen me so invested in the online campaign, had her interest piqued and wanted to try.

I am uploading it anyway in the hopes that she will officially join us for the next one :)

We played at the Alfutna Hangar, for it is mostly uncontested and we were not to alter the situation. Besides, Supplies is a nice mission for a begginer.

I concede initiative and she started by dropping a Delta, hacking my Azra'il and getting a box. She tried to down it, but that thing is though, so she moved the Delta to safety.

I followed by jumping my Khawarij and taking down her Epsilon. Then, my Touareg hacker revealed and took a crate.

She then tried to take down the Touareg with both her Gamma and her Delta. The Gamma ended up carbonited and the delta managed to immobilize my desert hacker

I managed to take down her hacker with my doctor, while recovering the crate from my Touareg. Also moved up my FO to take down a Kappa and get another crate in the open.

She responded by recovering her own crate with her doctor, reseted her Gamma and tried to blast my FO, both rolls failed.

With two crates in my power, I declared inaction and won the game.