Assaulted From On High

Commander, this is Kosmosoldat Lieutenant Ogrodnik of the Armored Combat Corps reporting in on the repelled assault on the Raveneye Starboard Railgun Battery. At 01835 MST (Mat Standard Time), a hostile presence was detected in the Exclusion Zone established around the battery. Initial intelligence reports were initially dismissed as an enemy spoof op, designed to divert critical Kosmoflot defensive forces away from the bulk of the EI’s assault troops.

The ACC was initially operating in a joint defense with the Orbital Shock Assault Battalion headed by Lieutenant Grimmsdottir in the adjacent station bay, standing by to engage enemy armored elements in case their positions were overrun. Major Beria, callsign MJOLNIR-1 dispatched from our unit to lend low-gravity orbital drop support while the rest of our unit was sent to investigate the reported disturbance.

IFF tags confused us at first – it appeared as if a pair of Sierra-class dronbots, of PanOceanian origin, had wandered near a Raveneye Officer patrolling the area and had triggered our perimeter defense. As a professional courtesy to our allies in the ICAF, a warning was issued to the encroaching units that our orders were to eliminate all intruders on our territory. Our hails went unanswered, but the dronbots did not open fire. Erratic comms chatter in the area, combined with an almost erratic behavior from the machines, gave us the impression that this was an isolated part of some Military Orders patrol. 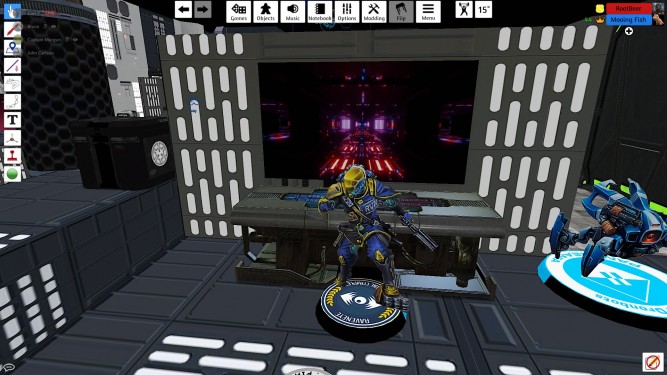 Erring on the side of caution, I ordered MJOLNIR-2, a Kosmosoldat special operative, and Patcher, MJOLNIR-3, to remain hidden and ready to launch a retaliatory orbital assault if needed. After a few moments of uncomfortable stillness, all hell broke loose.

Out of seemingly nowhere, a single contact came screaming into sensor range outside the hull of the station, stopping suddenly near the starboard airlock. A moment later, we lost contact with our Motorized Bounty Hunter patrol that was set to patrol th perimeter of our station. It became overwhelmingly clear that we were under attack. Another blip appeared on the radar, then another. Exterior surveillance revealed that a trio of Military Orders Knights, hailing from the Order of Santiago, had launched an orbital attack of their own. In unison, the trio of knights set down overlapping fields of suppressive fire, while one of the Sierra bots skittered into a defensive position to guard against any of our reinforcements from arriving. 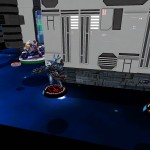 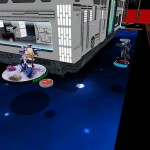 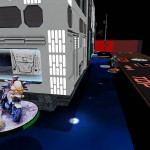 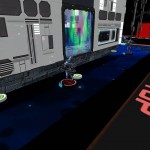 I am proud to say that the men and women under my command followed their orders in exemplary fashion. Our TAG, callsign "Battlebog", was first to act by moving forward and engaging the first Sierra. After a quick exchange of gunfire, the enemy was down. The firing lane clear, the Chernobog pilot wisely decided to lay down covering fire to dissuade any more attacks. 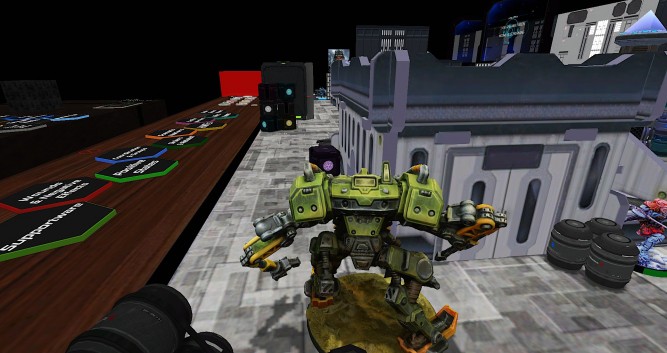 To be honest, I am not sure if Irmandinho Daniella Santos should be commended or reprimanded for her actions. While the smuggler had been assigned as the Battlebog's dedicated engineer, she had instead decided to follow the call of battle outside the station. She bounded off in an impetuous charge into the port cargo hold, chain rifle held at the ready. Shortly before reaching the compartment's airlock, the air behind her shimmered. An enemy Trinitarian, brandishing a boarding shotgun, materialized and opened fire at her. Daniella returned fire with her chain rifle, trading impacts simultaneously with her attacker. But while the Trinitarian collapsed into a bloody heap on the deck, Daniella managed to continue her charge.

In a fit of courage or insanity, the woman pulled on her respirator and jumped out the airlock. Her trajectory placed her almost on top of the remaining enemy Sierra, which immediately spun and opened fire on her. Miraculously, every shot went wide and she was able to achieve a kill on her target, breaking the enemy's defensive deadlock. 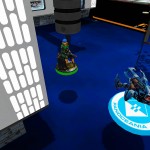 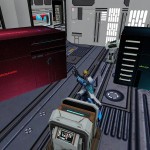 The knights began to advance, two breaking from their suppressive fire to attack the station in a wide pincer maneuver. The one closest to the downed Sierra, alerted no doubt thanks to his 360visor, turned and bounded off towards the site of the exchange. As he rounded the edge of the station, he was met with a blast of chain rifle fire from our steadfast Irmandinho. Despite inflicting notable injuries on the Santiago, a nanopulsar blast was all too capable of disabling her in return.

Across the station, in the starboard airlock, another perimeter alarm sounded. As if we had not had enough orbital knights bearing down on us, a Crusader Brethren arrived on the battlefield. Not interested in taking Battlebog's suppressive fire, the Crusader instead advanced to a position that allowed him to fire on a defensive Ranger fireteam before escaping out of the airlock. The Ranger fired his chain colt in return, downing the attacker, but received some injuries himself.

A second Crusader came crashing down next to his fallen brother, blind to all but righteous fury. He broke cover and advanced on the Unknown Ranger, either oblivious or indifferent to Battlebog's wall of bullets. Fortunately, the Ranger was quick enough to dive for cover while the TAG's HMG cut the knight into pieces. 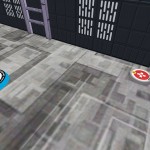 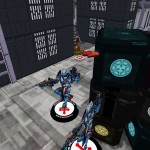 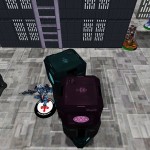 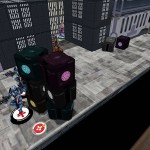 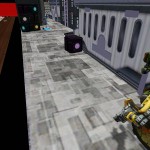 It was at about this time that the second Santiago had entered the station's portside airlock. The enemy managed to target the Ranger from behind while a Varangian laid down smoke, and fortunately was not killed by the surprise attack. Less fortunately, the Ranger had turned his back on the airlock he was guarding.

A third and final Crusader Brethren joined the fight, landing in the same position his allies had just used a moment prior. Learning from the previous two attempts, this Crusader ducked out of Battlebog's view and dove out to safety beyond the airlock. On his way, he loosed a fateful volley of shells that hit the Ranger in his exposed back, killing him.
Enraged, the Varangian nearby sprinted after the new arrival. Though the Crusader tried to create distance between himself and the incoming attacker, his efforts were in vain. The airlock hissed open one final time as the Varangian leaped out, axe poised to swing, and flew through the vacuum at the Crusader. A moment later, a severed arm holding an unprimed D-Charge floated through the abyss with the unharmed Varangian. Target down. 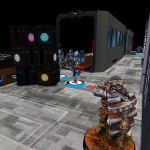 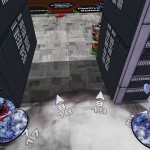 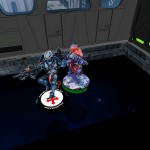 The battle for the port airlock did not go as smoothly. The Santiago Lieutenant, his work with Daniella concluded and now frothing with religious fury, stormed into the station with his Spitfire blazing. My fireteam attempted to defend against the attack, but my autocannon was too unwieldy to aim properly at such close range. Before I could acquire my target, a hail of Spitfire rounds punctured my armor and sent me back into cover. My partner in overwatch, a Frontovik sniper named Oleg, was cut down in a second exchange only seconds later.

MJOLNIR-3, a Patcher armed with a Vulkan shotgun, was sent on a danger-close assignment to neutralize the Santiago that had hit-and-run back outside the station doors after killing the Ranger. The Patcher, protected by his thick armor, would at least be able to withstand a Spitfire or nanopulsar firing in response to the arrival, allowing the Vulkan shotgun to do its terrible work. What nobody accounted for, however, was the E/M grenade that the Santiago produced and lobbed lazily at the incoming trooper. With that single attack, MJOLNIR-3 went dark as all armor systems and comms went blank. A few moments later, we watched in horror as the Santiago advanced and cut him down. 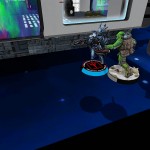 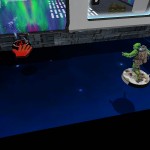 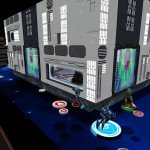 The fighting concluded when Battlebog, abandoning its defensive posture, came charging in to our rescue. Shrugging off enemy fire with its thick Tesium armor, the TAG advanced on the Santiago Lieutenant and opened fire. Though the Knight dove quickly, he was not faster than a bullet. With their forces mangled and their leader downed, the remaining two Santiagos retreated back into the void from which they had come. 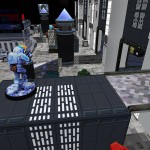 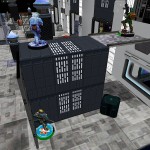 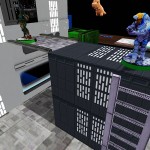 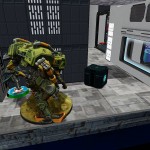 Post-battle analysis indicates that we had managed to inflict a grand total of six kills on the enemy - a Santiago, two Sierra bots, and three Crusader Brethren - while only suffering four losses ourself. I regret to inform you that Oleg was immediately Killed in Action, and I will be informing his family of their loss personally when this is all over. Of the other wounded, it is expected that Daniella will recover in short order, and a full search and rescue operation is underway for MJOLNIR-3, who is believed to be still alive somewhere.

On a personal note, I have no idea at the present why PanOceania would attack our very publicly-defended position. I recommend immediate and thorough investigation for Shasvastii involvement - or worse yet - tampering from a human rival. We will continue our integrated operations with Lt. Grimmsdottir as originally planned.

No matter what happens in politics, we will continue to follow our orders. No offworlder will capture this railgun while we still live.