No force has done more to defend the Durgama region from the Combined Army’s savage attacks than the PanOceanian military. Unfortunately, while the Hyperpower has committed its might to provide a shield for all humanity, Yu Jing has taken this opportunity to strike at PanOceania’s interests rather than commit its troops to fighting the alien menace. The attack on Cameliard has endangered the lives of countless civilians doing valuable research, and diverted much-needed military resources that could be used to blunt the Combined assault. This is a shameful and cowardly action by the StateEmpire that should be condemned by all peoples of the Human Sphere.

Thankfully, other factions of the Sphere are not so blinded by jealousy. Our Ariadnan allies have valiantly lent their aid to the defense of Cameliard, staging a broad security test and training session detailed in the report below. While NeoTerran forces were able to hold the line in this training exercise, it has helped the NeoTerran Capitaline Army identify holes in their defensive measures which, if breached, threaten to bring the whole defense of Durgama down in bitter infighting. We salute our brave comrades in the Kosmoflot Orbital Forces, and hope that soon, the entire Human Sphere can unite to drive back the aliens that are humanity’s true enemy!

Notes: We played using the fairly universal Midwest USA rules for buildings – models can see into and out of them, but cannot draw line of sight through them.

Pre-Game:
Both players chose to keep their Classified, rather than use it as an Intelcom card. Afterwards, NCA won the roll-off and chose to go first.

PanO Turn 1:
Things started out badly for the Hyperpower, as the Fusilier lined up a Missile Launcher on the Traktor Mul, and ended up being utterly annihilated by a mass of inaccurate but still very deadly Ariadnan munitions. This both took out some of the list’s best anti-armor capabilities, and left the Mul staring straight into the Armory for when the doors opened. Not great, Boys in Blue!

The Bolts fared much better, pulling away for their initial position to take out the Mul, as well as one of the Varangian Guard. With that initial target out of the way, the Locust moved up and, after one failed attempt, managed to figure out how doorknobs work. He then snuck inside, all sneaky-like. Uma Sorenson also moved into the Armory, only to be mowed down in ARO, because a certain NCA player forgot, momentarily, that SMGs are not incredibly long-ranged weapons.

The Bolts then ran all the way back to nearly the other side of the board, finishing off Wolfgang. Lacking the Orders to actually move into the Armory, they positioned just outside of the Armory to deter any attempts by Kosmoflot to enter.

The CSU, apparently a big fanboy of Uma’s, decided to replicate her maneuver by walking into the Armory and also finding herself with several new and inconvenient holes. The NCA player’s turn then ended, possibly more out of embarrassment than necessity.

Ariadna Turn 1:
Ariadna advanced cautiously, with the Unknown Ranger taking up a position across from the Armory and several others moving up to guard. The Patchers reformed their Link as a four-man, and moved around the side of the Armory.

The Varangian then began to march to the side of the Armory nearest to Ariadnan lines, parking himself just outside the door, Chain Rifle in hand, just daring anyone to make him drop a +1 Damage ARO template.

A Parachutist also arrived from near the NCA deployment zone, ready to cause trouble. Why else would you even make parachutes?

The Bear came over the mountain (okay, building), and stayed just outside of LoS to the entire PanOceania army. A pall of fear descended across the PanO lines. Pants may or may not have been wet. Bears are scary!

The Bulleteer zipped around to the side of the Armory, drawing a Flash Pulse ARO from the Parachutist that managed to both hit and stun the Remote. Undaunted by this, it entered the Armory and placed itself in front of the Ariadna-facing door, blocking access. The Varangian responded by putting it into an Unconscious state.

The Bolt Spitfire moved around and filled the Patcher with several bullets, then moved just a smidge into the building to do the same to the Varangian. The Varangian’s ARO took the Spitfire out in return while also killing the unconscious Locust and clearing several anti-Bear mines.

With the immediate AROs around the building taken out, the Bolt Paramedic revived the Spitfire. The Link was reformed, with the Spitfire, Sniper and Hacker entering the building. All sat ready to pour fire into the Bear’s eventual advance. Bears continue to be scary.

Ariadna continued a cautious advance, especially now that said advance would trigger Bolt problems. Several models moved up to surround the Armory, including the Scots Guard, who ended up very close to the Ariadna-side door.

The Parachutist, sensing an advantage, snuck around behind Aida and the Paramedic and moved into their front arc only when delivering a mass of buckshot to them. Aida was killed, while the Paramedic managed to dodge. Fugazi Flash Pulses ended his rampage for the turn.

Not to be outside, the second Patcher sent the Bolt Sniper & Hacker to their doom in a hail of Vulkan Shotgun fire, and was taken out by Bolt AROs in return. The circle of life was complete.

The Unknown Ranger also took the opportunity to take out one of the Fugazi, who were keeping a lock on the building.

With the turn over, PanOceania scored by Dominating the Armory.

PanOceania Turn 3:
The Fugazis Stunned the Parachutist, while the Bolt Spitfire moved around to end his career of parachuting, with prejudice.

Uma, feeling saucy after her revival, moved to take out the Scots Guard, who cleverly dodged into CC with the Bulleteer.

With just one Order left, the Bolt Spitfire decided to poke the Bear, moving into LoS of the big hairy Ursine Murder Machine, with the intent of plinking off a Wound or two. With a miraculous shot, he managed to beat the Bear’s Dodge with four of five dice, and the Bear managed to fail three of the four Armor rolls. MVP!

The Polaris Controller, enraged by the death of her Bear friend, ran forward and dropped the Bolt Spitfire with her shotgun. Uma’s ARO sent her to be with her beloved Bear.

The Unknown Ranger attempted to take out the Bolt Paramedic, but a successful Dodge roll kept her up.

Finally, it was all up to the Scots Guard. A set of fairly perfect circumstances could very well swing the battle to Ariadna, and he’d be damned if he didn’t try. A complex plan was put into place, beginning with Step One – eliminate the Bulleteer he was currently in CC with – which promptly failed, ending with the Scots Guard paralyzed by the plucky little REM. Womp womp! 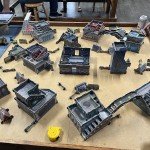 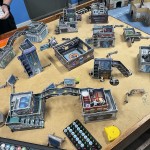 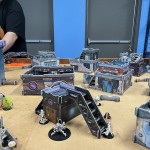 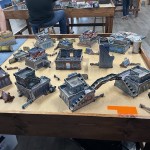 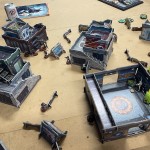 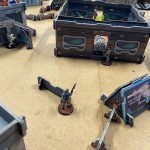 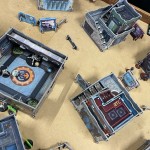 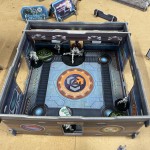 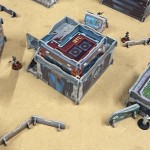 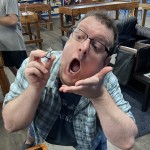