Get off our Ship!

Dutch watched as Rokuro slowly backed off the thrust and observed the small, slowly approaching luminous dot in deep space. After a few minutes, he could make out details with the naked eye: the small clouds of debris slowly circling the command bridge. Fires fed by internal oxygen in the rear sector 03. He looked to the right, where the planet Concilium Prima filled the entire viewport. Somewhere down there was the Alfutna Terraforming Studies, the destination of the goods they were to evacuate from the station.
He stood up and left the cockpit of the small, demilitarised space cruiser. They would quickly go in, look around for the delivery and then quickly get the hell out of there.

-Aboard Raveneye Space Station-
Dutch ducked behind a crate, peered cautiously out from behind a corner and jerked back as a bullet flew worryingly close to his head. The planned mission had just gone down the drain. The guard on the Raveneye didn’t even think about handing over goods to them, papers or not. They had to gain control of this area and push the guards back so that they could safely bring the containers onto the Black Lagoon.
A plan formed in his head and he activated his TeamKom to pass it on to his lieutenant.

Round 1
TUN
Szalamandra 1 on my right flank advanced and took out both Jaguars.
Szalamandra 2 on my left flank then advanced and put the Al’Hawwa in dead state.
A Spektr decloaked in the center of the field and advanced toward the RiotGrrl left. He ran around the corner, laid down a Depl.Rep., and perished in the combined AROs of Bandits KHD and F113-Turret.
The following hacker duel between Interventor KHD and Uhahu was decided by the Tunguska hacker and Uhahu left the chat. The Interventor then tried to Hacks the RiotGrrl Spitfire, immobilizing her.
Finally Szally 2 advances, survives all AROs and takes out the F113-turret

SC
The Bandit MSR on my left flank decloaked and began an exchange of fire with Szalamandra 1. Szally 1 first lost an STR but then took out the Bandit.
Raoul tried to combat jump behind the Interventor team but failed and entered the battlefield next to the RiotGrrl team.
The Hardcases on the building tried to destroy the Depl.Rep. but only hit unimportant components and was in turn taken out by the Interventor and Szally 2.
The Bandit KHD tried to glue the Szally 2 in front of her, but was taken out by the ARO.
The RiotGrrl fireteam was reformed again , moved out of the Depl.Rep’s ZoC and strafed Szally 2, losing the TAG 1 STR again and the RiotGrrl MultiRifle 1 Wound.
On my left flank, the Haris advanced behind the buildings to secure the nearest zone

Round 2
TUN
Clockmaker healed Szally 1 and completed the Classified objective. Szally 1 then advanced and attacked the Haris, losing 2 STR and only destroying the Digger’s armor. The Clockmaker became active again and repaired 1 STR, which was lost again in the next firefight with the Haris. However, Szally 1 also managed to take out the Brawler Hacker, the Digger, and my Alguaciles Lt. in the process.
The Clockmaker advanced into the zone and tried again to fix Szally 1 – but failed the roll, thus putting Szally 1 in unconscious state.
On the right flank, Szally 2 tried to get into a more favorable firing position, but was destroyed by the RiotGrrls and Raoul, but I lost Avicenna and an wound on Raoul and the RiotGrrl Spitfire.
Now my situation looked much better – but with the last order the Clockmaker repaired Szally 1.

SC
I started in LoL state and let my remaining units advance.

Round 3
TUN
The Interventor Fireteam advanced down the gangway, isolated the two RiotGrrls and managed to take out Raoul

SC
I aborted my move because my CSU could not reach the Clockmaker to capture the zone and the RiotGrrls already controlled their zone.

“Dutch looked at the hangar in front of him with the smoking remains of one of the Szalamandras. Out of the corner of his eye he noticed a movement. The second Szalamandra was cautiously moving around the corner of a container. Dutch retreated into cover, activated his TeamKom and ordered the remaining team members to retreat. No need to get into more trouble with the TJC.

The Black Lagoon slowly slid out of the hangar into the heat of space and set course for Concilium Prima. Dutch still had a word to say with his employer.” 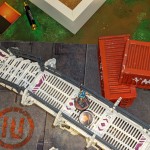 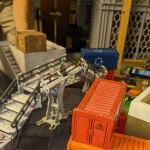 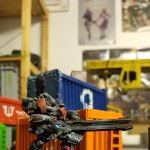 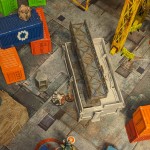 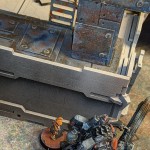 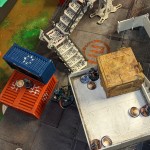 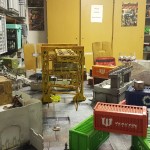 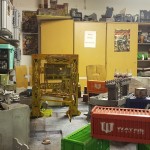 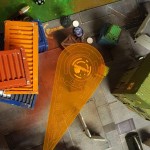 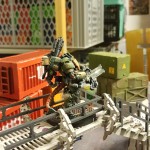 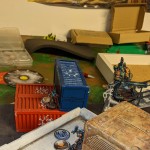 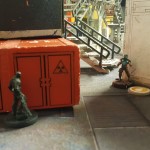 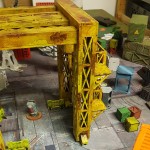 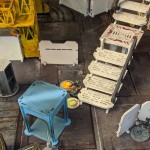 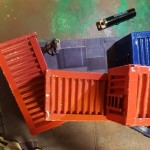 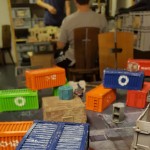 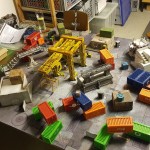 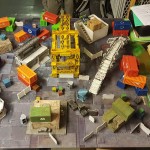 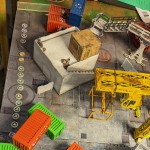 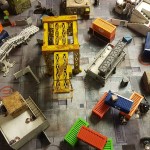 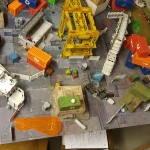 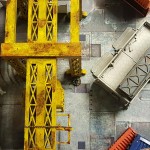