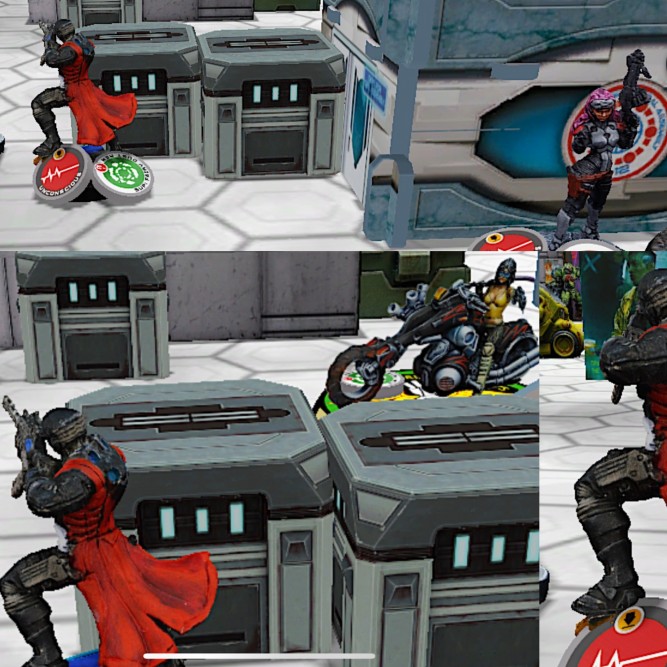 Top of Turn 1: Haqq
Haqq begins by pushing up their bikes, with Knauf firing at a flashbot, who tanks two hits on a pair of 20’s. He attempts to kill the other flashbot, but he rolls 3 18’s against the bot, who is in cover. Zamira pushes forward to light shotgun the Granzer, who makes the saves thanks to the Symbiocuirass. Moving forward again, Zamira dies to a BSG Securitate, but sends the Grenzer and Interventor to the floor, putting TJC in loss of lieutenant. As Haqq pushes its team forward to avoid the biotechvore zone, the Azra’Il finds an angle to shut down the Grenzer for good.

Bottom of Turn 1: TJC
TJC repositions to keep their team outside of the Biotechvore zone. 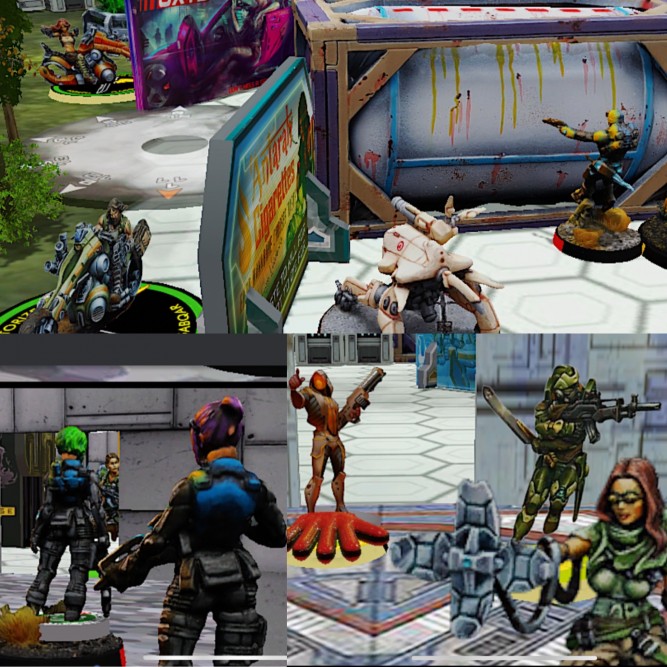 Haqq begins their turn by shuffling around their backline to be out of the biotechvore zone. Zuleyka covers the lone Kum rider with smoke as he pushes up to land templates on the TJC Haris. The flashbot goes unconscious while the Hollowman takes a wound. Perseus successfully dodges into CC. On the other side of the fight, the Asawira/Azra’IL duo attempt to kill the Securitate HMG and the Zondnautica. The HMG tanks the hit, while the Zondanutica burns to a crisp. A Ghazi pushes forward onto the Securitate Core, shutting down the BSG. Following up on this distraction, the Azra’IL kills the HMG. With this opening, Zuleyka, alongside the Mukhtar and Asawira, move into the Panic Room to dominate it. 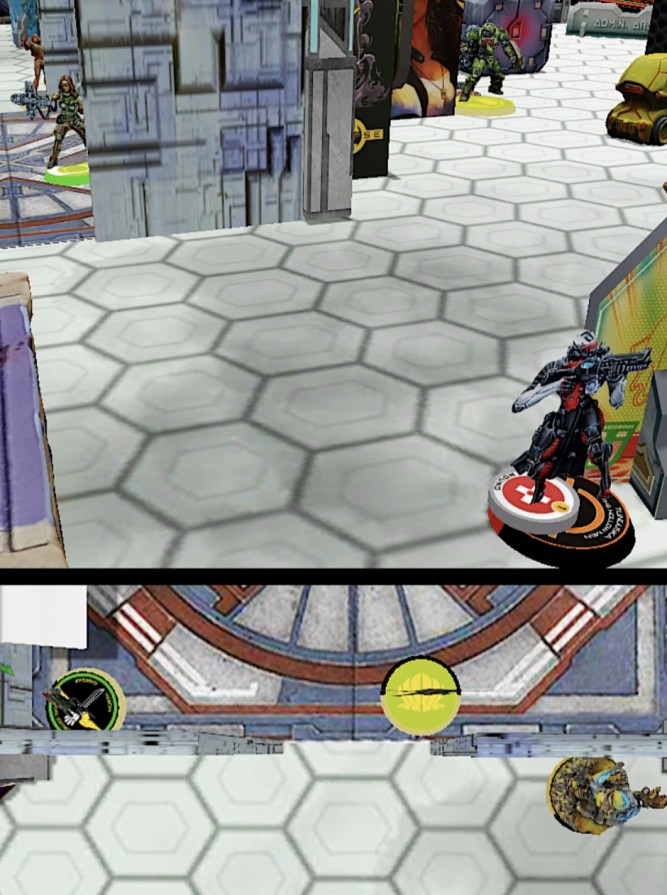 Bottom of Turn 2: TJC
TJC immediately takes the lone Kum rider off the board thanks to Perseus. With their Securitate Core decimated, they move to form a new core, bringing the Pitcher Hollowman into the Haris. The Spitfire Hollowman zig zags through the cover, shutting down the Azra’IL while taking the last Ghazi jammer. He slips in and out of cover to put a wound on the Mukhtar and blast away the other Ghazi, while saving against his E/Marat. The last Securtate makes a misguided flank and gets shot off the board by the remaining Ghazi and the Asawira. The Heckler moves to kill the Asawira, but gets burned down by Zuleyka. However, he sends Zuleyka unconscious. Finally, TJC reveals the Pitcher Hollowman as their Lieutenant, who fails to land hits on the Asawira. 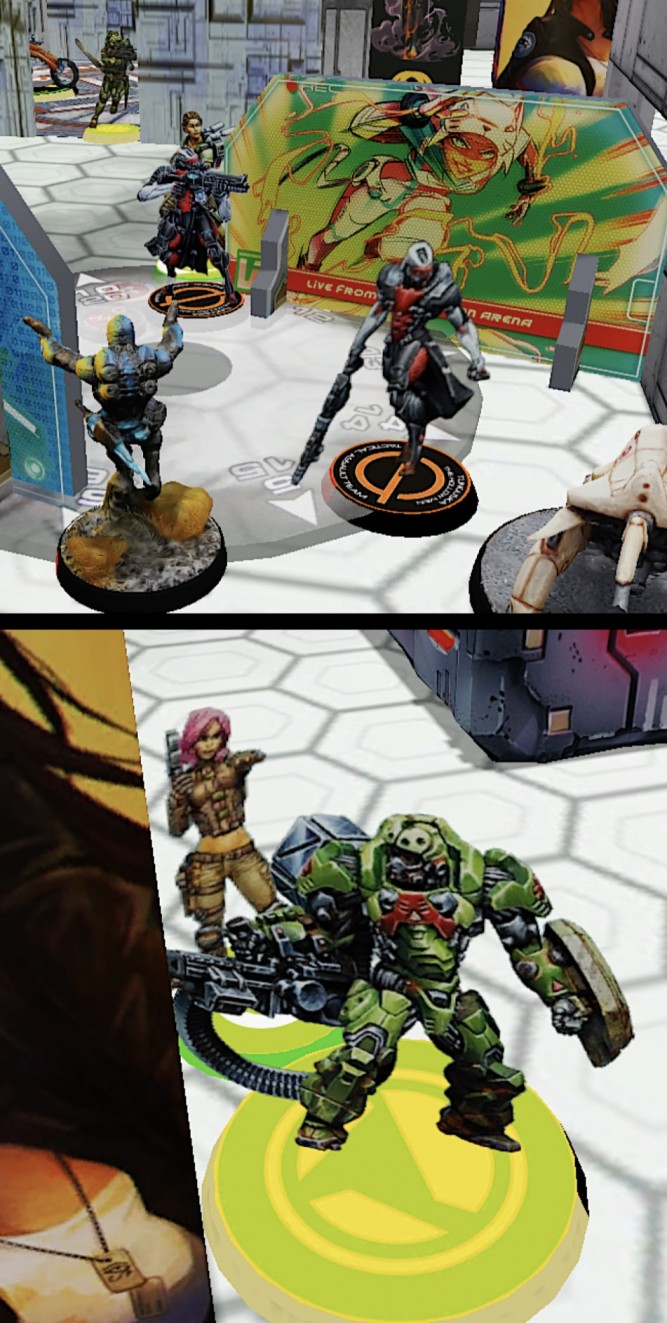 The turn starts with the remaining Ghazi rounding the corner to template the fireteam. The Spitfire Hollowman goes unconscious, but chain colts to clip the Asawira, landing a wound. Perseus goes NWI, but lands smoke to deter further combat. A Ghulam Doctor rushes up from the backline, reviving the Azra’IL. The MSV Mukhtar looks for revenge on Perseus, but all five shots plink off of Perseus’ armor. As Perseus slips into cover, the Mukhtar attempts to take out the Pitcher Hollowman, who tanks all four shots that land. Tired of this fireteam, a Barid moves up and lands a pitcher in range of the remaining Hollowman. Failing his reset, the Hollowman becomes targeted, and eats a missile alongside his Stempler companion, sending TJC into loss of lieutenant.

Bottom of Turn 3: TJC
With only Perseus and the Stempler remaining, the two choose to retreat to TJC command, realizing the downsides of not bringing a Puppetmaster.

1 Person Has Recommended DeliverThisDough G5185 For a Commendation